Mellow Video Game ReMixes & Lullabies
for Gamers of All Ages 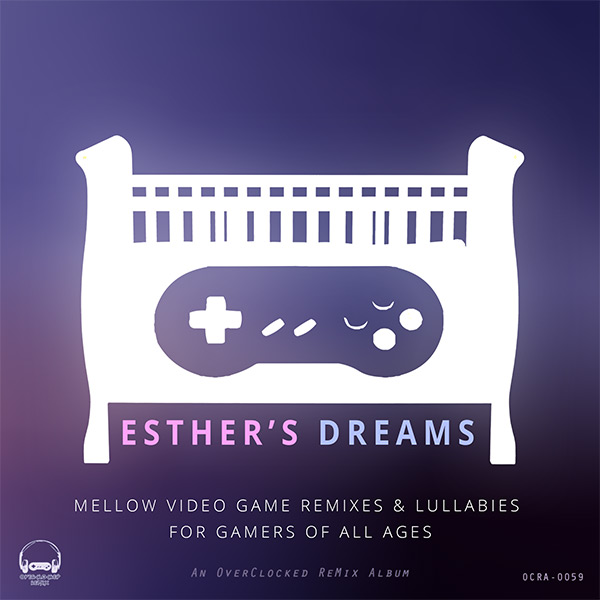 djpretzel is the founder of OverClocked ReMix. His first daughter, Esther Fiona Lloyd, was born on December 19th, 2013. To celebrate, artists from the community came together for an album of lighter VGM arrangements, centering on themes of playtime, downtime, & sleepytime. The end result is Esther's Dreams, a free tribute to video game music that babies, infants, toddlers, kids, adults, parents, grandparents, and young & old alike can enjoy. Except for teens.

...Okay, teens too. Esther's Dreams features 32 arrangements of 28 games, including The Legend of Zelda, Chrono Trigger, Super Mario 64 & more. We hope you enjoy it, and we especially hope that new parents get their little ones to sleep & play while introducing them to some of the best music there is - video game music!

Before djpretzel's daughter Esther was born, Dave's sister Emily emailed me wondering if I could coordinate a baby-themed album as a celebratory surprise for the baby shower. I loved the idea and the lullaby focus was an obvious choice. That said, I'm a relaxed kind of guy and took my time; being completely honest, I also didn't want to jinx anything before the little bundle arrived, but envisioning this being released after Esther's successful first year of life really resonated with me and gave the community ample time to come up with some fun and relaxed pieces. We privately shared the community's work with djp for Esther's first birthday, and now that Esther's two AND joined by bouncing baby Sarah, we're finally ready (and possessing enough free cycles -- barely, I've got my own daughter now too!) to release this joyous musical effort to the community at large.

When I told Kris about the album concept, she let me know from the start that she'd be involved in a big way, and indeed she was the driving force behind making this happen, always asking for status updates and ensuring things moved forward. In life, the squeaky wheel gets the grease (live by it!), so be sure to surround yourself with good people who won't tolerate you being in a state other than motivated and focused.

Kris's idea to segment the album based on energy levels was excellent, and I love how things turned out by going for three different discs, Playtime, Downtime, and Sleepytime. For those of you who are parents with young kids, please let us know if they work as good background or sleep-inducing music for your little ones. :-)

Thank you so much to Emily for asking me to make this happen, Kris for reminding me to make this happen, and thank you especially to the artists for their inspired work, baby photos (!), and for sharing pieces of themselves in their music. They've not only come together to do something cool for lil' Esther, her mom Anna, and proud papa Dave as OCR's founder; they've also come together to create music infused with the energy of youth, innocence, love, and family. From our VGM-loving family to yours, enjoy!

I became a judge on December 13, 2013, and six days later on December 19th, djpretzel became a first-time father to beautiful Esther. During a flurry of new-judge chatting, Larry casually asked if a few of us could throw together some baby-friendly tracks for Dave, to celebrate Esther's birth. Larry was looking for about five tracks, to be completed within two weeks or so. Haha! This was just a few days before Christmas and MAGFest, so the response was lukewarm at best. Busy people, busy time of year.

At MAGFest, halc and I hatched a plan to collab on a track from Yoshi Touch & Go that totally fit the bill for the baby concept. We got the track ("Baby Blue Sky") finished by February, but ours was still the only one. Fast forward: one enormous mass-email written by Larry, much bugging of Larry by me, and one full year later, and we had 32 lovely baby-friendly tracks we presented to Dave for Esther's first birthday! The response to the call for tracks was tremendous, everyone was super-enthusiastic, and we received enough varied tracks to create three separate discs: Playtime, Downtime, and Sleepytime, with a mini-bonus disc of Sillytime. We've got music for every baby mood!

Congratulations, Dave and Anna, on Esther. She really is the most beautiful kid I've ever seen (besides my own kid, OF COURSE). We hope you enjoy these tracks, and we really hope both Esther and Sarah enjoy these tracks.

Downloading the album using BitTorrent is the best option - it helps us save bandwidth and gives you the option of downloading MP3, lossless FLAC files, or both by selecting which files to grab in your BitTorrent client.

3-04. "Another Dream Will Start from Here" (The Legend of Zelda)

Founded in 1999, OverClocked ReMix is an organization dedicated to the appreciation and promotion of video game music as an art form. Its primary focus is ocremix.org, a website featuring thousands of free fan arrangements, information on game music and composers, resources for aspiring artists, and a thriving community of video game music fans.